Opt-in Replace by Fee (RBF) was standardized in December 2015. But who is supporting it and what is the user experience like? This post presents a study of BIP125 opt-in RBF as seen by users of popular Bitcoin wallets and block explorers. The findings were initially presented during the most recent Bitcoin Optech Workshop in Paris.

Understanding how other wallets, exchanges, and block explorers handle opt-in RBF transactions is an important consideration for Bitcoin services. In order for exchanges or wallets to support RBF, they want to know that there is broad support for RBF and that user experience in receiving wallets or block explorers is not confusing.

The goal of this study is to evaluate how opt-in RBF is supported in the wallet and explorer ecosystem. While the study is meant to be more descriptive than prescriptive, we do have some general recommendations. When evaluating usability, each service should consider the experience and knowledge of its user base. Hopefully, the compilation of this information in one location will help Bitcoin companies make informed decisions about how to support RBF and even start some discussions about which techniques work and which do not.

Transaction replacement is important as it can enable:

As well as those basic use cases, RBF can be used in more advanced scenarios such as:

Full transaction replacement was available from Bitcoin’s original 0.1.0 release until 0.3.12, but there were a few potential downsides. Namely, the unrestricted ability to replace transactions meant there was no rate limiting mechanism to prevent DoS/spam replacements. There was also no incentive for a miner to replace the transaction, especially if the original transaction had the same or higher feerate.

That changed when an implementation of Peter Todd’s BIP125 “Opt-in Full Replace-by-Fee Signaling” was merged into Bitcoin Core 0.12.0. BIP125 solves both the spam prevention and incentive issues mentioned above by requiring higher transaction fees for replacement transactions.

Bitcoin wallets were evaluated on the following criteria:

Bitcoin block explorers were evaluated on the following criteria:

Additionally, usability, in the form of captioned screenshots, were documented for each criteria.

During the timeframe of analysis, August - November 2018, the aggregate findings show:

Below are a few select examples of how different services handle RBF from a usability perspective. None of the examples is included to be critical of any particular piece of software, but demonstrating the maturity of RBF’s usability and support.

Where appropriate, bug reports have been filed.

In this example Electrum tags an RBF signaled transaction with a subtle “rbf” label. Electrum is one of the few wallets that supports RBF for both sending and receiving.

BIP125 allows additional inputs to be added to the replacement transaction, which would resolve these insufficient change output failures. However, this is not currently possible through the Bitcoin Core UI. 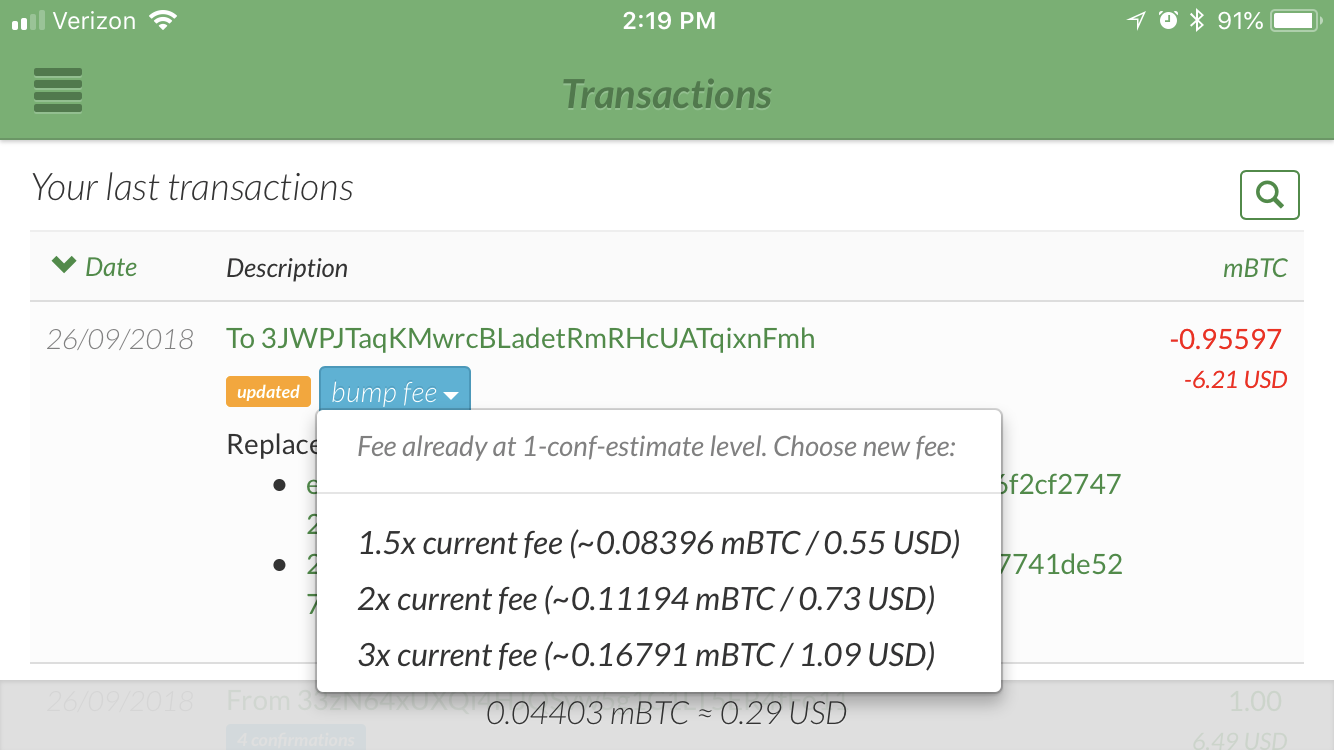 GreenAddress allows the user, who is trying to bump an existing transaction, to choose their fee bump level based on some preselected options. Fiat (USD) amounts are also shown which means users do not need to do the conversion manually. The GreenAddress bump fee dialog also has an estimation about the current fee confirmation level. 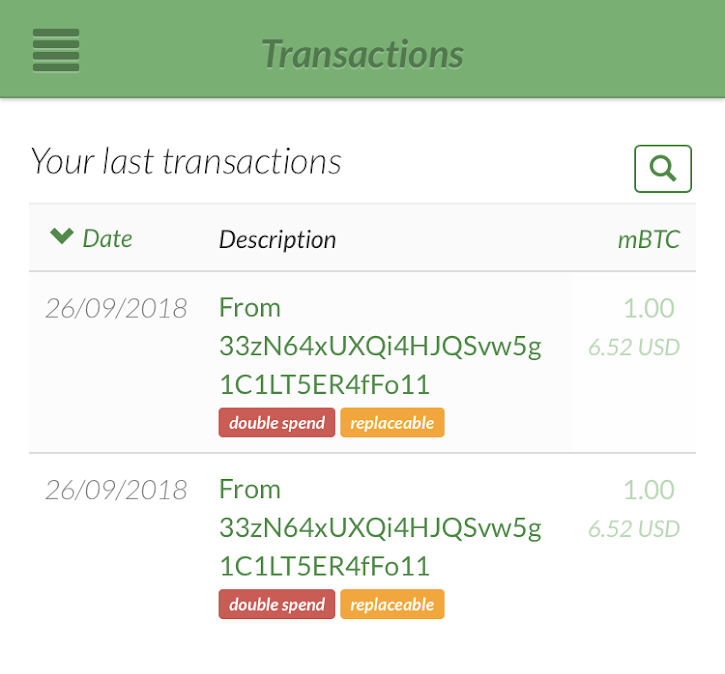 GreenAddress shows a visual RBF flag (“replaceable”) in the Tx list. Also noted is the fact that there is a double spend since a replacement transaction has already been broadcast in this example. 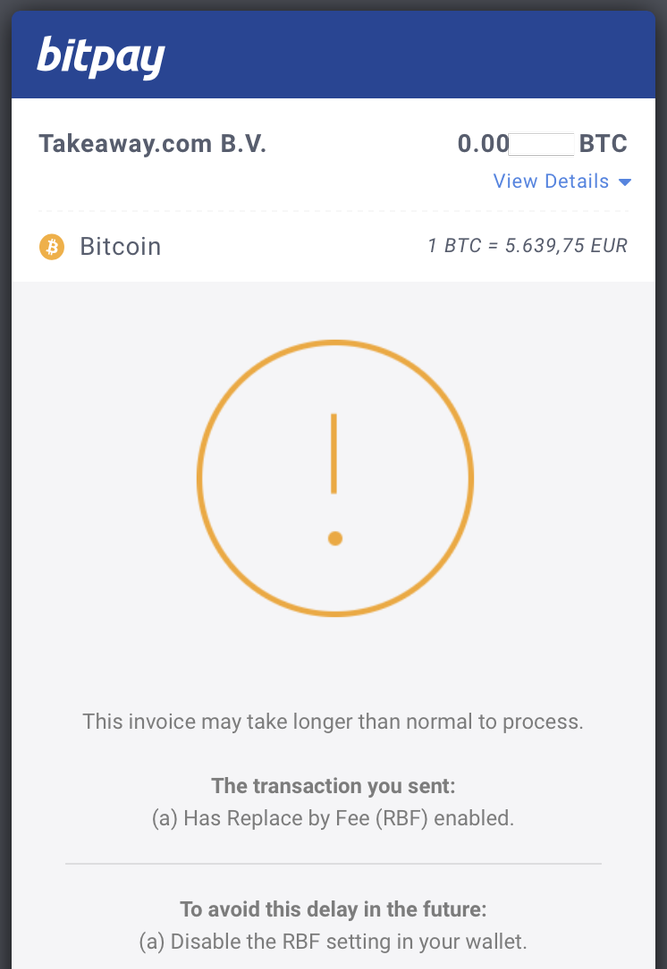 Bitpay shows an explicit warning for RBF transactions saying that there may be a delay in processing. Bitpay also recommends “To avoid this delay in the future disable the RBF setting in your wallet”. These messages are misleading and also infer that unconfirmed “non RBF” signaled transactions are not replaceable. 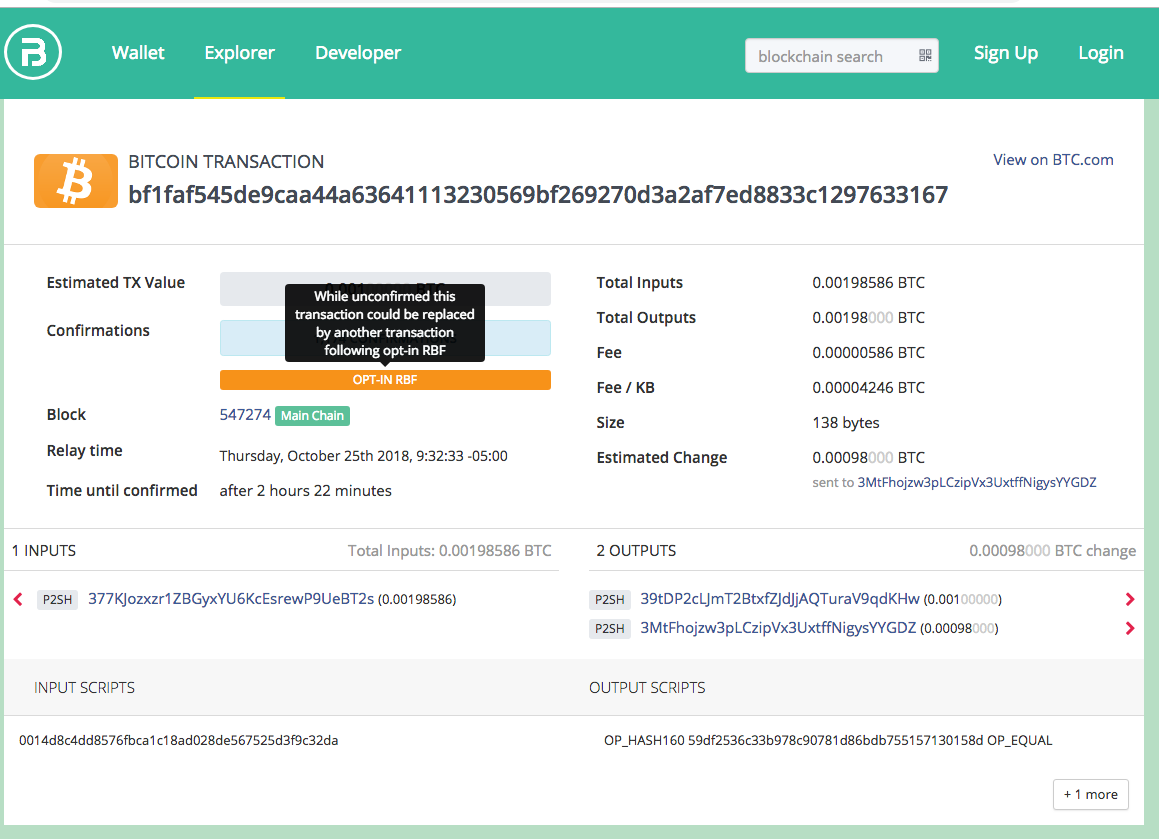 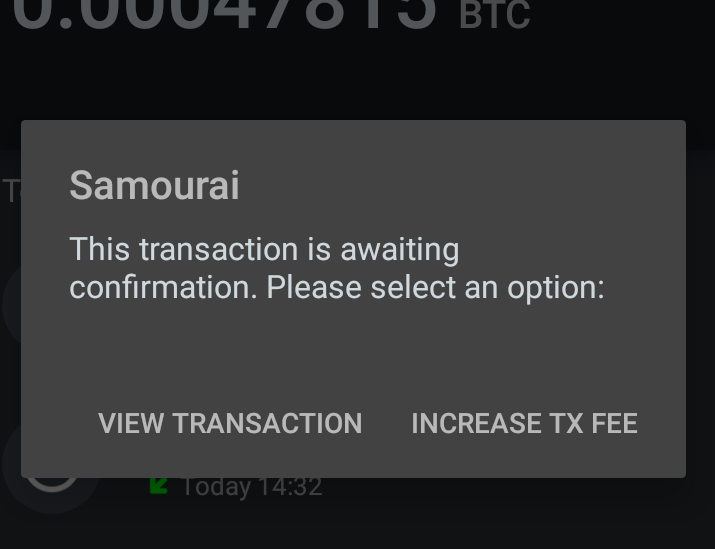 Similar to the Bitcoin Core example above, there was a problem with fee bumping the transaction. However, in this case, there was a silent failure and no message for the user on what happened. There were sufficient funds in the wallet for a replacement transaction.

Additional testing showed that fee bumping is possible in Samourai and perhaps this is an edge case in the code involving the change address or additional inputs.

Note: Coinbase account balance was not affected. Optech is in communication with Coinbase regarding this and they are working on a fix.

A user seeing two normal looking transactions and an increased balance might be confused when the transaction later disappears and their balance is smaller. 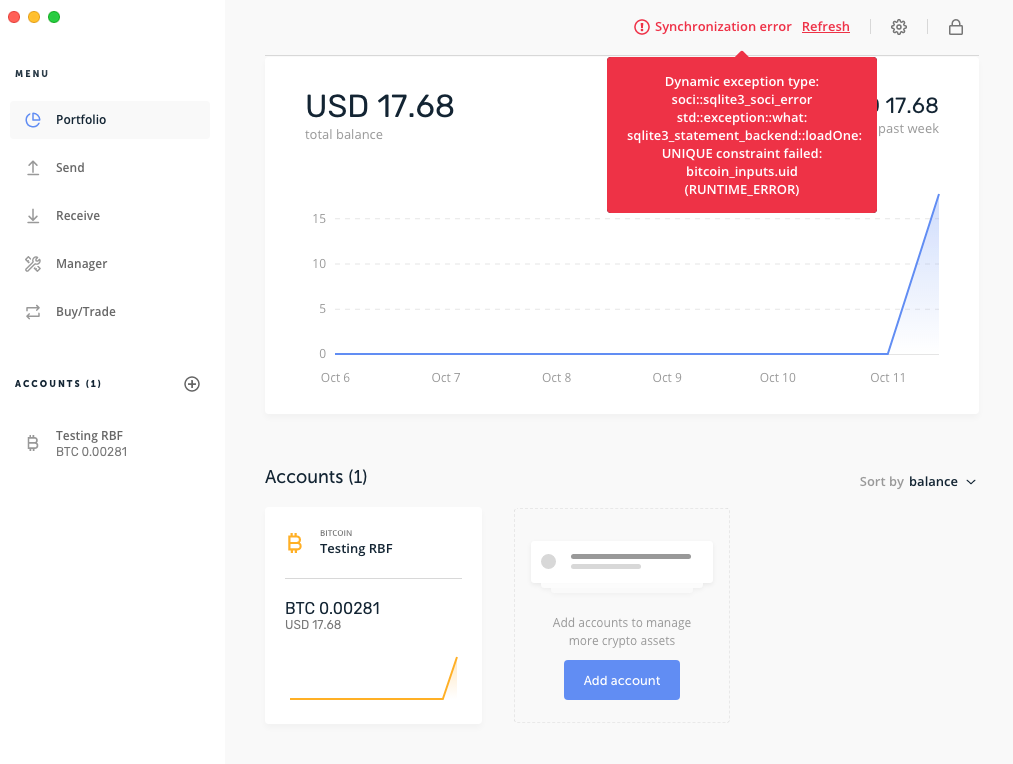 Ledger Live’s internal database was corrupted by the replacement transaction.

Note: The fix was to reinstall Ledger Live. Optech is in communication with Ledger regarding this issue. 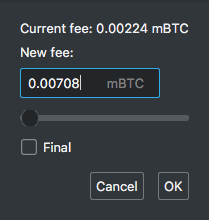 Electrum allows more advanced control of the fees in the UI. Additionally the dialog provides the capability to mark the transaction as final. 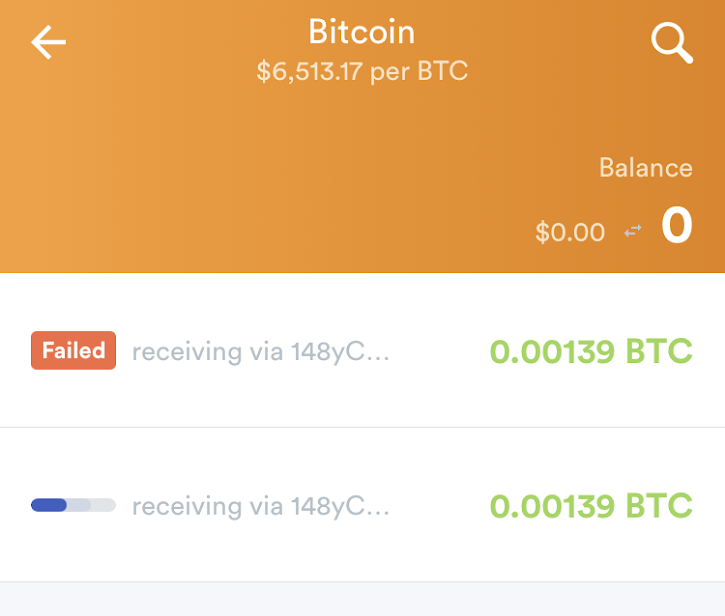 BRD shows a “Failed” label on the replacement transaction. In testing, the “Failed” transaction actually ends up being the transaction that confirms.

A blanket recommendation for wallets, explorers, and other Bitcoin services would be to support opt-in RBF. Most of the services tested in this study do not have any support for RBF. As congestion builds on the network in the future, RBF will be an important tool in the scaling toolbox.

Based on some of the examples above, there are some additional recommendations regarding RBF support.

This recommendation is similar to previous one, only applied to wallets instead of explorers.

Original transactions should be persisted in the UI, even subtly or under an advanced dialog. When sending a replacement transaction, a user may still want to have a reference to previously attempted, never-to-confirm transaction in their wallet.

Wallets that support RBF and do not provide block explorer details within the app itself, should link to an RBF-compatible block explorer. This will provide a consistent experience for the user as transactions will not “disappear” when transitioning from the RBF-supporting app to the non-RBF-supporting explorer.

Wallets/Exchanges should consider linking to the block explorer’s “address” page instead of “transaction” page. This can simplify the fact that transactions might be replaced/disappear from the explorer while also providing a single reliable link where someone can view the transaction.

It is preferable that the explorer implement a redirect scheme similar to the one outlined above, however, this is a more user friendly alternative if that option is not available.

Transactions signaling RBF could be visually labeled both in transaction list and transaction detail screens. Alternatively, RBF-signaling transactions could be the default and NON RBF transactions get an “unbumpable” type label. Such a label is most useful for letting a user know which of their transactions are BIP125 replaceable. Ultimately, any unconfirmed transaction can be replaced.

Don’t Trigger Based on Unconfirmed Transactions

Given the warm reception this study has received so far, a follow up study regarding Bech32 support across wallets and explorers is in the works.

As more metrics are collected, a better format for collecting and displaying the results will be a dedicated Optech Wallet Compatibility website.

If you have a suggestion of additional metrics that you think are valuable or Bitcoin services that you would like to see evaluated in the future, please reach out to mike@bitcoinops.org.